In the Ranging Tradition:
Texas Rangers in Worldwide Popular Culture

Rangers have existed for hundreds of years in many cultures. They were militia men, usually volunteers, mustered into company service to protect homes and families from enemy incursions. The tradition is a part of both our Anglo-European and Spanish heritage. Units, such as Roger’s Rangers in the French and Indian Wars, and Spanish/Mexican “flying companies” in the early Southwest, established the Ranger as part of American culture. 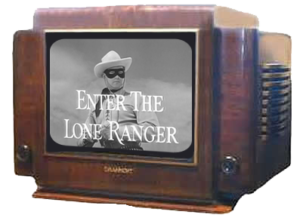 The most famous and long-lived of Ranger organizations is the Texas Rangers. Created in 1823 to protect the “Texian” colonies, the Rangers were the primary defense for Texas from the Republic to statehood. Their primary mission, until well after the Civil War, was protection from Indian and Mexican incursions. As the 19th century drew to a close, their responsibilities changed from military protection to law enforcement, duties they continue to perform today.

Almost from the beginning, the image of the Texas Ranger has been one of romance and adventure. The nation was first introduced to the Texas Ranger by news dispatches and stories chronicling their heroic deeds during the Mexican War. The Ranger and the ranging tradition soon became a theme in popular culture. The Ranger was celebrated as one who could fight and prevail against over overwhelming odds, surviving the hardships of the frontier. The Ranger became an icon of rugged individualism, courage, honesty, and virtue. Songs, poetry and novels about the Rangers were common as early as the 1850s. Today, movies, radio, television, advertising, merchandise, sports teams, toys and games keep the popular image alive. And, although not all of these characters and products bearing the name Ranger can be directly traced to the Texas Rangers, they all still share, in some way, the ranging tradition.

The Ranging Tradition as Marketing Tool

Advertising and entertainment have always had a close association. Promotional items — fast food give-aways, toys, games — are produced to advertise movies, television shows and sports teams. They are sometimes more successful than the products they promote. Companies in the 20th century capitalized on the popularity of ranger related programs to promote their new products and create new ones.

In the 1930s Kelloggs sponsored the radio show Riding with the Texas Rangers and a club called the Junior Texas Rangers was promoted through cereal box promotions. Each enrolled Junior Ranger received a commission, a badge, and the opportunity to purchase a cowboy hat, clothes, a ring, and a toy pistol. Kelloggs also promoted the movie The Texas Rangers which was released at the Texas Centennial Ranger character actors, including The Lone Ranger, Buck Jones, Buck Rogers, and Ranger Joe promoted products from bread to cereal, and from ice cream cones to school supplies. They also inspired countless games, toys, posters, pins and badges which are all now part of a large “pop culture collector’s market.” 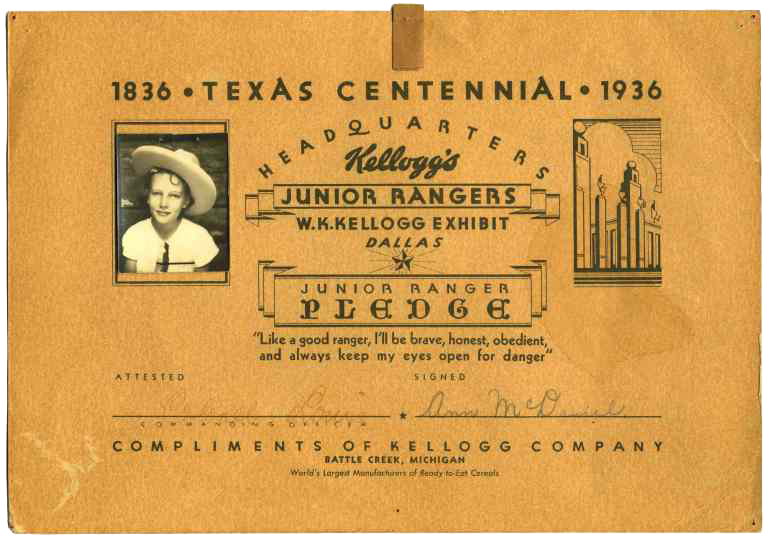 The modern world of advertising has enthusiastically embraced the ranging tradition, ranger characters, and the Texas Rangers specifically. Companies have named their products after the Ranger, or used the image of the Ranger.

The most popular light pickup truck in the world is the Ford “Ranger” which evokes the image of ranging open spaces. Winchester has named its brand of ammunition marketed to the law enforcement community Winchester Ranger.

Businesses in the past named their products such as bicycles, motor oil, and even potatoes after the Texas Rangers. Still other companies simply use the ranging and ranger tradition to characterize their products and services, emphasizing the integrity, courage, and toughness of the Ranger.

Ranging in the Entertainment World

From the 1920s through the 1950s, Texas Rangers and Ranger characters appeared in movies, radio programs, and television programs.

Perhaps the most famous and enduring of these characters is The Lone Ranger who appeared on radio, television and in the movies. Created in 1933 by George Trendle for Detroit radio station WXYZ , the Lone Ranger was an overnight success. Over 6 decades later, the popularity of the Lone Ranger remains high. The character starred in nearly 3,000 radio episodes, two movie serials, three feature movies, 18 novels, more than 220 television episodes, uncounted newspaper comic strips, comic books, cartoons and promotional items.

Who was that “masked man” who became this cultural icon?

The Lone Ranger is the sole survivor of an ambush that killed five of his Texas Ranger comrades. With the help of Tonto, a friendly Indian who cames to his aid, the Ranger buried his five companions and recoverd from his injuries. In order to mislead the outlaws into thinking that all of the Rangers died, the Lone Ranger dug a sixth grave which was left empty. Hiding his identity with a black mask, he set out with his new friend to track down and apprehend the outlaws. Hi-Yo, Silver! Away! 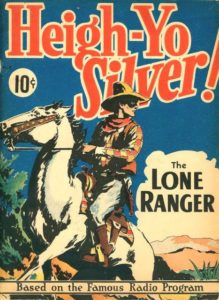 But the Lone Ranger was not alone for long. Whether on the big screen, radio set or small screen of television, Rangers were soon found everywhere.

Another show that successfully crossed over from radio to television was Tales of the Texas Rangers. Tales was first broadcast on NBC radio from 1950 to 1952 and starred Joel McCrae as Texas Ranger Jace Pearson. The stories were said to be based on actual Texas Ranger case files dating from the 1830s to 1950. A television program starring Willard Parker and Harry Lauter spun off from the radio show and aired on CBS from 1955 to 1957. It was rebroadcast on ABC from 1957 to 1959. Producers recruited retired Texas Ranger Captain M. T. “Lone Wolf” Gonzaullas, as technical advisor. Each script was submitted to the Texas Department of Public Safety headquarters for review.

The popularity of the television western faded to near extinction in the 1970s. In the late 1980s it was reborn when baby-boomers, who grew up with the Lone Ranger and Tales of the Texas Ranger, hit middle age. The Lonesome Dove mini-series and Walker, Texas Ranger had introduced the Ranger to a whole new generation of fans. 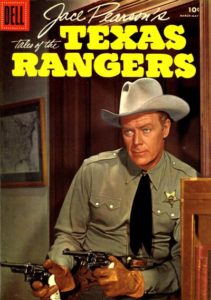 The Ranger was not relegated to just the western. The “Atomic Age” that dawned in the 1940s led to a fascination with science fiction in the 1950s. In search of a hero, the Ranger was transplanted in space and time from the frontiers of the Wild West to the frontier of outer space.

Characters such as Buck Rogers, Captain Video, and Rocky Jones were dubbed space rangers and were ordered to defend the final frontier on radio, television, in comic books and novels. More recently rangers have been found in programs such as Babylon 5 — even Buzz Lightyear from Disney’s Toy Story is a space ranger. Like their western counterparts, these lone Rangers uphold the ideals of the ranging tradition.

The big screen has seen a resurgence of movies with Texas Rangers playing pivotal roles. Not all of these movies are set in the Old West, many of them are set in the Texas of the mid to late 20th century. These include Extreme Prejudice (1987), Pair of Aces (1980), and A Perfect World (1993). To name just a few, John Wayne, Fred MacMurrey, George Montgomery, Audie Murphey, Walter Brennan, Rip Torn, Kris Kristofferson, Nick Nolte, Tommy Lee Jones, Robert Duval and Clint Eastwood have all portrayed Texas Rangers.

In 1856, two novels — Bernard Lile by Jere Clemens and The Rangers and Regulators by A. W. Arrington — were published. Since then, Rangers have been a part of the story line in dozens of books in the western, detective, police and even the romance genre. Novelists quickly discovered that a Ranger in the story was an almost certain guarantee of success. 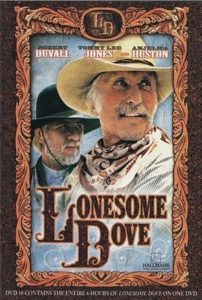 In addition to mainstream publications, the pulp and dime novel industry of the late 19th and early 20th centuries brought Texas Ranger stories to a broader, and younger, audience with affordable and easy to read novels. Pulps were the forerunners of today’s formulaic novels. The plot was predictable – wrongdoers threaten/harm innocent people, places, or things with the hero Ranger arriving to save the day. By changing the names of the main characters, and, perhaps a place name or two, the same story could be used for the Texas Rangers, Buffalo Bill, Deadwood Dick or any of the other heroes of the pulps. Hundreds of issues were produced every year for very little cost.

The Texas Rangers continued to be a popular topic in western novels from the1910s to the 1950s and the detective and true crime books of the 1940s – 1960s. Today, Rangers are showing up in the works produced in the multi-million dollar romance novel industry. Since the 1940s the traditional book format has been joined by magazine and comic book publications. Two modern examples of bestsellers using Texas Rangers in their plot lines include Larry McMurtry’s Lonesome Dove series and James Michener’s epic Texas. 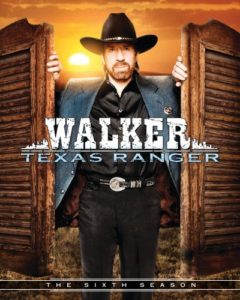 In addition to the examples of Rangers in pop culture presented above, Rangers can be found in other areas. How about Rangers in song and verse? One of the oldest known Texas Ranger songs, The Texas Ranger, dates from the Mexican War period of the late 1840s. Other ranger songs and ranger poetry have come down to us through the cowboy song tradition. The 20th century has seen many ranger songs being written to accompany the movies and television programs featuring ranger characters. And ranger songs often appear on the albums of modern country western, cowboy and folk artists.

We’ve barely scratched the surface of the ranging tradition in popular culture. We challenge our readers to list everything they can associate with the ranger name. Be sure and include other ranger law enforcement organizations – that have not survived to the present – such as the Arizona, New Mexico, Colorado, Montana, and California Rangers. And don’t forget Ranger Bass Boats and Bell Ranger Helicopters. What about the rangers who patrol and protect our national parks and forests? You will find that the list will grow to be quite lengthy. Again, not all of these rangers can be directly traced to Texas Rangers, but many can. The thread that binds them together is the ranging tradition.