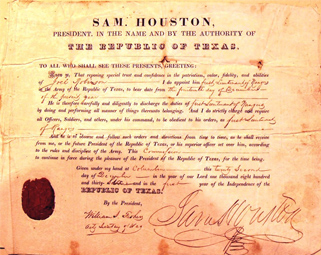 In May of 2013, the Texas Ranger Hall of Fame and Museum’s Tobin and Anne Armstrong Texas Ranger Research Center received a generous gift from Margaret Hickman.  Mrs. Hickman, of Maryland, donated a Ranger Commission for First Lieutenant Joel Robison signed by President Sam Houston, The Republic of Texas on December 22, 1836.  Joel Robison moved to Texas with his parents and sister in 1831 and settled first near Columbia in Brazoria County.  With his father, he served in Captain Henry Stevenson Brown’s company at the Battle of Velasco on June 26, 1832.  Later, Robison would become a volunteer Indian fighter in the company of Captain John York.  Robison is purportedly the last messenger from the Alamo; he bore a dispatch dated February 24, 1836.  At the Battle of San Jacinto, he was a private in Captain William Jones Elliot Heard’s Company F of Colonel Edward Burleson’s First Regiment, Texas Volunteers, and was one of the party that captured Antonio Lopez de Santa Anna.

PRESIDENT, IN THE NAME AND BY THE AUTHORITY OF

THE REPUBLIC OF TEXAS.

TO ALL WHO SHALL SEE THESE PRESENTS, GREETING:

Know ye, that reposing special trust and confidence in the patriotism, valor, fidelity, and abilities of Joel Robison I do appoint him first Lieutenant of Rangers in the Army of the Republic of Texas, to bear date from the fourteenth of December of the present year.

Given under my hand at Columbia this twenty-second day of December in the year of our Lord one thousand eight hundred and thirty-six and in the first year of the Independence of the REPUBLIC OF TEXAS.

Signed by President Sam Houston, The Republic of Texas, December 22, 1836

Promotion for participating in the capture of General Antonio López de Santa Anna,
following the Battle of San Jacinto.