Formation of the Texas Department of Public Safety

In 1933, a consulting group, Griffenhagen and Associates, reported to the Legislative Committee on Organization and Economy that current law enforcement agencies were too small and ill-equipped to enforce the law.  They recommended the formation of a central state agency for the regulation and supervision of departments intended to enforce the laws of Texas. The consulting group found that the Texas Rangers were the only statewide law enforcement agency with full police authority.  Their function was “the prevention and suppression of violations of the major criminal laws of Texas and the arrest of criminals”. This contrasted with the State Highway Patrol who were generally limited to enforcing traffic and vehicular laws and assisting stranded motorists. On August 10th, 1935, the Texas Department of Public Safety (DPS) was formed and organized into three divisions: Headquarters, the Texas Rangers and the State Highway Patrol.

Texas Rangers and the Texas Department of Public Safety

Texas Rangers investigate the burglary of a safe. ca. the 1940s.

Before the formation of the Department of Public Safety, the Texas Rangers were under the Adjutant General's office. This military agency had supervised the Rangers since their earliest days. Through most of the 1800s, the Rangers were more military in nature and responsible for the protection of Texas citizens. With the change in focus to professional law enforcement, the Rangers were out-of-place within this military department. In addition, Rangers had been appointed by the Governor making them susceptible to the political upheavals of the early 1900s.

Becoming part of the DPS allowed the Rangers to distance themselves from this political atmosphere and continue to refine themselves into a modern elite law enforcement agency. After the formation of the Department of Public Safety, the Texas Rangers were issued firearms, vehicles and other equipment as finances permitted. They also gained access to resources such as the crime laboratory and fingerprint files in Austin. Control of Ranger appointments shifted from the Governor and Adjutant General to the Director of the DPS. Unqualified men could no longer be issued Ranger commissions by Governors as political favors. The quality of the force continues to improve through strict requirements and tests.

In 1957, the Department of Public Safety was reorganized. Ten to twenty Rangers were assigned to one of six regions but still retained statewide jurisdiction. Today, Majors and Lieutenants command Rangers who are responsible for specific counties within that area. Today. company headquarters are located in Houston, Garland, Lubbock, El Paso, Weslaco, and Waco.

As part of their regular duties, Texas Rangers work closely with members of local, state, federal and international law enforcement agencies. When criminals flee Texas to avoid capture and prosecution, a Ranger has the authority to pursue and arrest them. Texas Rangers stationed near the Mexican border regularly work with police officers in Mexico to apprehend fugitives. The INTERPOL (International Criminal Police Organization) assists the Texas Rangers when they pursue fugitives outside the United States. In the early twentieth century, Texas Rangers working along the international border with Mexico recovered stolen livestock and protected the state from armed bandits.

Modern Rangers work with the Border Patrol and Customs Service to apprehend fugitives from justice and work with various federal agencies in the investigation of major crimes. Rangers also work closely and share resources with investigators from other state law enforcement agencies. The Texas Rangers work with State Troopers of the Department of Public Safety and officers of the Department of Corrections to apprehend prison escapees and investigate the smuggling of contraband into state prisons. The investigation of a criminal act often goes beyond the jurisdiction of local officers. Because the Texas Rangers have authority to conduct investigation all over the state of Texas and even outside the state, if necessary, they are often called in to assist in investigations that cross jurisdictional boundaries.

Since 1935, the Texas Rangers have been a division of the Texas Department of Public Safety. Their law enforcement role has often been described as a “state FBI agency.” By state law, current Rangers are charged with four responsibilities, including:

Although the responsibilities assigned to the Rangers are similar to those of local law enforcement officers, the Rangers differ by having an unlimited jurisdiction within the state of Texas. Additionally, they often act as a liaison between local, state, federal and international agencies. 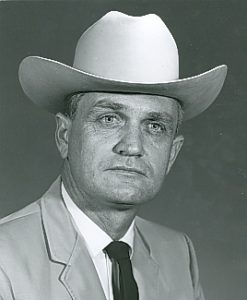 After WWII, Glenn Elliott had no specific goals except to find work to support his family. This goal changed in 1948 when Elliott met a former teacher and coach from Windom High School, Jim Elmer Riddles. Riddles had joined Texas DPS in 1941 and would later become a well-known Texas Ranger Captain. Riddles encouraged Elliot to join the DPS Highway Patrol.

In 1949, Elliott joined DPS and worked as a Highway Patrolman for the next 12 years. During those years, he used cool reasoning and good judgment in a variety of cases, including the 1957 Lone Star Steel Company strike. Even before the strike, Elliott had decided to be a Texas Ranger. He first applied in 1956 and reapplied yearly while waiting patiently to be selected. Finally, on October 8th, 1961, he became a Ranger and was stationed in Marshall, Texas. By 1963, he was granted permission to move his duty station from Marshall to Longview, Texas where he was stationed until his retirement on August 31st, 1987.