Owned by Ranger J. B. Gillett 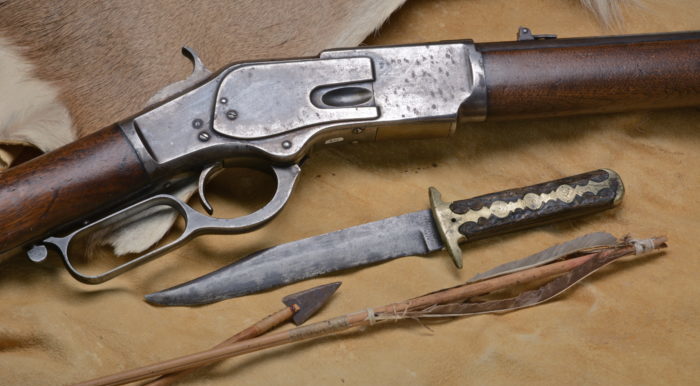 The Winchester Model 1873 lever-action was one of the most popular rifles produced by the company, sometimes referred to as "the gun that won the West". The rifle was chambered for the new .44-40 centerfire cartridge, which quickly became the most widely used cartridge in America. Even as subsequent rifle models were introduced, the popularity of the Model 1873 remained high and over 720,000 were produced between 1873 until 1919.

This Winchester Model 1873 .44-40 caliber carbine was used by Ranger J. B. Gillett during his six years with the Texas Rangers. Gillett mentioned the rifle in his memoirs, noting that he bought it in Austin in 1875 and used it throughout his Ranger service. He likely bought the Sheffield Bowie knife at the same time. His Ranger Company saw numerous confrontations with Kiowa, Comanche and Apache tribes along the frontier. The arrows were later given to him by Herman Lehmann, a white captive of the Apaches in Texas in the 1870s.

For more information about this artifact, click the article link below: