In the past few years, I have been working closely with the wonderful staff of the Texas Ranger Hall of Fame and Museum both in researching as well as photographing artifacts for my recent book, Firearms of the Texas Rangers, From the Frontier Era to the Modern Age.  Like many large museums, their collections are extensive, but not what I would call complete.  There are a few gaps in their collections.  This collection is not only important to the Texas Rangers but to the citizens of Texas themselves.  After identifying a few of these gaps, and then I started thinking how best I could help fill them.  I am no collector, but I did identify one area that I could help.  The P1853 was the second most popular long arm used by both sides during the Civil War.  It was collectively called the Enfield even though it was made by several companies in Great Britain, and was imported by both the North and the South during the Civil War.  This specific Civil War Ear P1853 is well used and any manufacturing markings have been worn off.  Texas Ranger James B. Gillett specifically mentioned this type of arm in his book Six Years with the Texas Rangers:

“Many Confederate soldiers returning home from the war brought with them old Enfield muskets.  These were smooth-bore and chambered one large ball and three buckshot.  These old guns, loaded with small shot, were fine for use on birds and squirrels, but they had one serious objections- they would kick like a mule.  As the boys used to say, they would ‘get meat on both ends.’ A days shooting with one of these muskets would leave one’s shoulder and arm black and blue for a week.”

Surplus Civil War arms were important to the Rangers as well as to the citizens as this would have been the only weapon many men had after the war.  These weapons were extremely important for protection as well as just eating and surviving.

Few museums have all the historical items that are required to tell the complete and true story they wish to relate.  Some of the gaps I have found would be above the reach of all but a few of us, but working together it is possible to help fill in these gaps and help tell the complete story of the Texas Rangers, as well as Texas itself.  Few museums have an acquisition budget of any substantial amount to help fill these gaps.  It is up to those of us that care for history to work together to help.

Firearms of the Texas Rangers: From the Frontier Era to the Modern Age by Doug Dukes, Denton, University of North Texas Press, 2020. 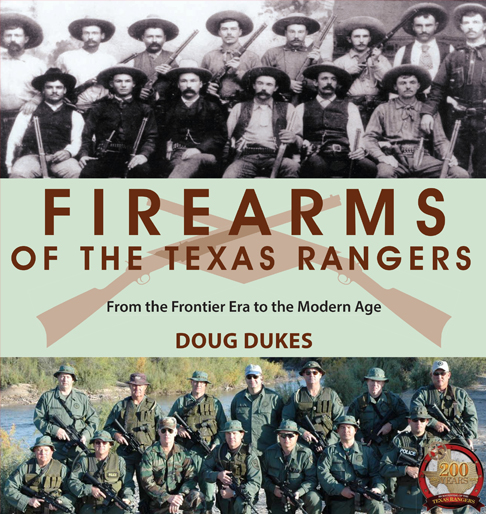 From their founding in the 1820s up to the modern age, the Texas Rangers have shown the ability to adapt and survive. Part of that survival depended on their use of firearms. The evolving technology of these weapons often determined the effectiveness of these early-day Rangers.

Firearms of the Texas Rangers, with more than 180 photographs, tells the history of the Texas Rangers primarily through the use of their firearms. Author Doug Dukes narrates famous episodes in Ranger history, including Jack Hays and the Paterson, the Walker Colt, the McCulloch Colt Revolver (smuggled through the Union blockade during the Civil War), and the Frontier Battalion and their use of the Colt Peacemaker and Winchester and Sharps carbines. Readers will delight in learning of Frank Hamer’s marksmanship with his Colt Single Action Army and his Remington, along with Captain J.W. McCormick and his two .45 Colt pistols, complete with photos.

Whether it was a Ranger in 1844 with his Paterson on patrol for Indians north of San Antonio, or a Ranger in 2016 with his LaRue 7.62 rifle working the Rio Grande looking for smugglers and terrorists, the technology may have changed, but the gritty job of the Rangers has not. Hardcover $45.00 + Tax.