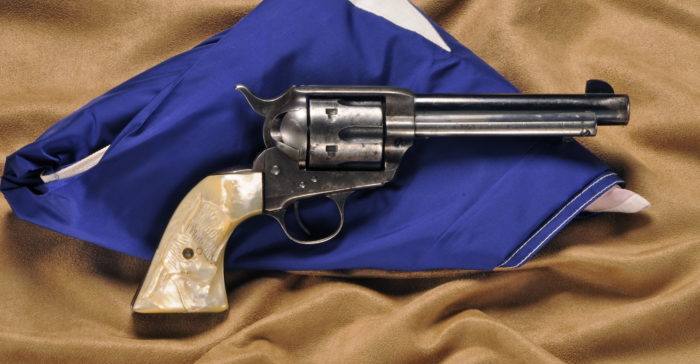 This popular firearm, also known as the "Peacemaker", "Frontier Six-Shooter", "Equalizer" and the "Thumb-buster" is an internationally recognized symbol of the Old West. The Single Action Army was Colt’s first reliable, mass-produced metallic cartridge revolver. Besides being reliable it was also affordable, and in 1877 it sold for only $17.00. These features made it one of the most popular firearms of all time and an icon of the American West.

The Single Action Army revolver pictured was used by Capt. Lon Willis in the Ranger Service, Emergency Co. "M", in 1915. The popular firearm was produced by Colt for many decades, from 1872-1940. It was used by many famous and infamous figures of the Western frontier, as well as many Texas Rangers. Rangers Frank Hamer, Tom Hickman, James B. Gillette, Bill McDonald, and John R. Hughes are known to have used the Single Action Army.

For more information on the Colt Single Action Army, click the article link below: