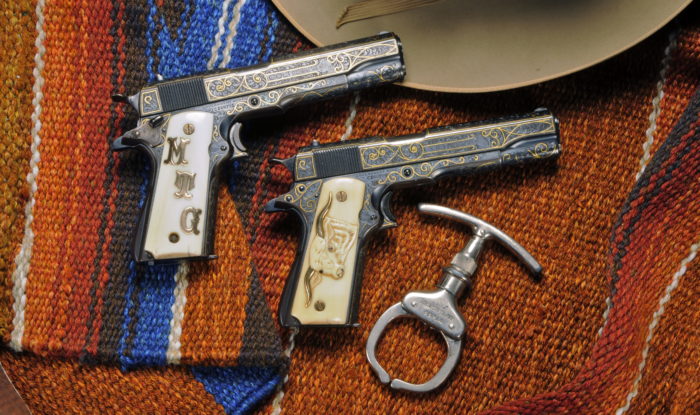 Texas Ranger Captain Manuel T. Gonzaullas enjoyed a long and illustrious career in Texas law enforcement, working in the oilfields and along the Texas-Mexico border. He used this pair of Colt 1911A1 Government Model pistols during his Ranger service. The pistols are factory engraved with gold inlay, gold monogrammed initials on the right, and a longhorn on the left of the ivory grips. Both pistols feature cutaway trigger guards, which is said to have been a signature feature of Gonzaullas’ guns, as well as other unique custom details.

Each is inscribed near the trigger with the Spanish motto"No me saques sin razon; no me enbaines sin honor." This was a popular inscription on 17th Century Spanish armor. Translated it means "Do Not Draw Me Without Reason, Do Not Sheath Me Without Honor".

For more information about this artifact, click the article link below:

Pair of Colt 1911A1 pistols owned by M.T. Gonzaullas