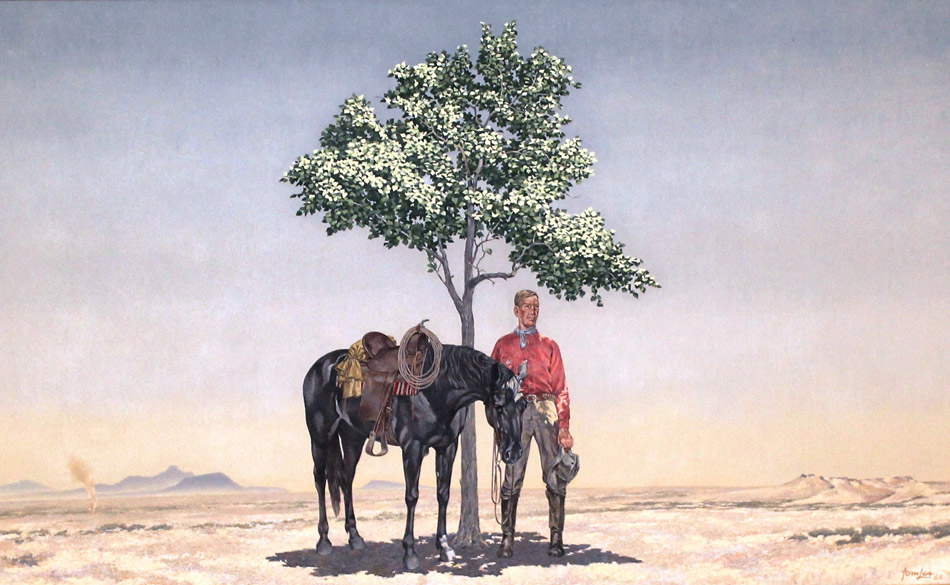 Painted by artist Tom Lea (1907-2001), A Little Shade depicts a western horseman standing next to his horse under the shade of a small tree. A barren landscape stretches out behind him. Tom Lea was a notable painter, muralist, author and historian of the 20th century, and many of his works depict these rugged scenes of his native Texas.

Tom Lea was born in El Paso, Texas in 1907 and grew up during the Mexican Revolution. After completing his education in El Paso, Lea attended the Art Institute of Chicago where he studied under muralist, John Norton. From 1926-1933 he worked as a muralist, commercial artist and art teacher in the Chicago area. Lea then moved to Santa Fe, New Mexico where he worked on staff at the Laboratory of Anthropology until 1935.

Lea returned to El Paso in 1936 and completed four murals under the Treasury Department, Section of Fine Arts. He also illustrated several books and served as a war artist-correspondent for LIFE magazine during World War. Lea wrote and illustrated such works as The Brave Bulls (1949), The Wonderful Country (1952) and his autobiography called A Picture Gallery (1968). He lived in the El Paso area until his death in 2001. The Texas Ranger Hall of Fame and Museum is privileged to have several works by Tom Lea on display at the museum.

To learn more about the artist, visit the Tom Lea Institute website.