Behind the Symbol:
Historic Badges of the Texas Rangers

The Texas Rangers were organized into two groups following Civil War Reconstruction. The Frontier Battalion (1874-1901) operated state-wide, and the Special Forces (1874-1881) were stationed between the Rio Grande and Nueces Rivers. Under the command of the Texas Adjutant General, Rangers were charged with protecting Texas from Indian and bandit raids.  Beginning in the 1880s, each Ranger carried a Warrant of Authority and Descriptive List. These documents provided proof of the Ranger’s authority and a physical description.

Ranger badges first appear during the Frontier Battalion Era, when their focus shifted from frontier defense to keeping order in the new settlements. The State of Texas did not supply badges. The few Rangers who wore them before 1900 either commissioned a metalworker to make them, or placed an order with a police supply company. The earliest Texas Ranger badges were simple circle-star, shield or star designs that could be made from five and eight peso Mexican silver coins.

By 1901, the Indian Wars had drawn to a close. The Texas legislature reorganized the Rangers into a new “State Ranger” force with full police powers, allowing them to adapt to emerging challenges, such as organized crime, gambling and bootlegging. Although not yet issued by the State, many Rangers wore badges to identify themselves. Rangers selected their badges based on personal taste and availability, resulting in a wide variety of designs.

In 1935, the Texas Rangers were reorganized as a division of the newly formed Texas Department of Public Safety. For the first time, the State issued badges to the Texas Rangers. Since the formation of DPS, there have been three official styles of Texas Ranger badges. The first style, introduced shortly following the formation of DPS, includes a shield overlaid with a circle-star. In 1957, it was replaced by a blue enameled circle-star design, based on the Lorenzo de Zavala flag of 1836.

In 1962, Colonel Homer Garrison, Jr. approved the design of the current badge, crafted from Mexican five peso silver coins for Rangers and Lieutenants and fifty peso gold coins for higher ranks. Inspired by early Ranger badges, the current badge is decorated with wreaths of olive and live oaks from the Great Seal of Texas. Personalized styles have also been approved, and incorporate the name of the Ranger. 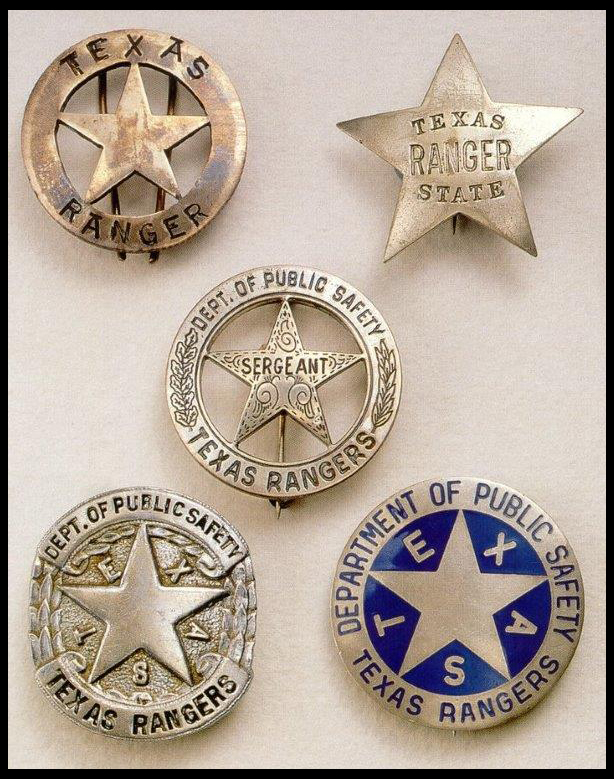 Historic Badges of the Texas Rangers