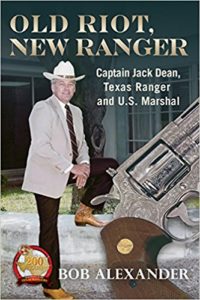 This excerpt comes from Chapter 11 of the book, which finds Captain Dean receiving a lead on a case involving Charles Voyde Harrelson—the estranged father of actor and Texas native Woody Harrelson.

Before 1979 June was history, Texas Ranger Captain Jack Dean had received a big-time clue about the big-time case. At the Texas Ranger office Virginia Goss, his devoted secretary, took the initial telephone call, someone asking to “speak with Jack.” Virginia cupped her hand over the receiver and whispered: “Captain, there’s a man on the phone but he won’t give me his name, he wants to talk to you.”

The lifeblood of a good criminal investigator circulates on information. Sometimes reliable, sometimes not, but the law enforcing guy/gal incapable of instilling confidence and trust in a network of obliging spies is—and will remain—clueless forevermore: “So, I took the call and I’ll never forget the old boy said, ‘Jack,’ didn’t call me Captain or Ranger, he said ‘Jack,’ Charlie Harrelson was in San Antonio the day Judge Wood was killed. . . . Just wanted you to know Charlie was in San Antonio the day Judge Wood was killed.” Quite naturally Captain Jack Dean asked the key bottom-line question: “Did he kill the Judge?” The CI—who was really taking a big-time chance—answered curtly and with inimitable finality: “He was in town.” A dial tone amplified the fact he had no more to say—period!

Captain Jack Dean was not in a quandary. There were but two issues to digest. Neither was indefinite. There would be no hesitation. He would willingly and quickly share what he learned. On the other hand, there were but two people in the telephone conversation, Jack Dean and the “old boy” passing along the hot news. Captain Dean’s record of remembrance with regards to the CI’s real identity is now and was then charily couched: “I was really not sure who it was. . . . Never did know for sure.” The “know for sure” aspect absolved Captain Jack Dean of breaking faith with anonymity—the CI’s anonymity. Since he wasn’t absolutely sure—even if he had a good idea—he could ill afford a mistake. The good guesswork, he’d keep that to himself. Otherwise a guy might be dumped face-up in a sand dune or face-down in a pump-house.

Texas Ranger Captain Jack Dean substantiated that, indeed, Charles Voyde Harrelson had been in the Alamo City when Judge Wood was ticketed to eternity. That the FBI was floundering in the sea of no information and misinformation is not said gratuitously—it was fact. Judge Wood was dead. One accomplished journalist rightly penned: “The list of felons who had a motive to kill ‘Maximum John’ Wood was a mile long.” The suspect list—if one counted those he’d sentenced to the care and custody of federal prison wardens—really was extensive. Murder contracts can issue even from behind electronically accessed custodial cages—if the loot is right! Bandidos inside and outside federal and state prisons had a reach. Mafia wheel-horses and drug smuggling kingpins knew no boundaries—steel or surveyed. Measures of their morality had been mislaid. And, of course, that did not count the scores of hapless defendants docketed for pleas and/or courtroom trials before Judge Wood’s bench. The pool was deep!

Dutifully, subsequent to his passing along information regarding his shadowy telephone conversation, Captain Dean was summoned to meet with the FBI Deputy Assistant Director at San Antonio, the “one sent down to run the case.” He had asked for a face to face with the Company D Captain. Jack Dean was to and would and did share every tidbit he knew about Charles Voyde Harrelson. The Bureau Boys had no knowledge—not an inkling—about the Texas outlaw from Lovelady. “We sit down and go over everything I’ve ever known about Charlie Harrelson for four or five years, just whatever it had been.” Pointedly, Captain Dean was asked if he would—since he knew Charles Voyde—assist them with interviewing Harrelson if and when the Bureau ever did choose to follow up, make personal contact, and pick him up. Captain Jack Dean willingly agreed. Besides sharing his knowledge, Captain Jack Dean even provided the FBI Deputy Assistant Director with a mug shot of the talkative and debonair Charles Harrelson, “whose profession was robbery and murder for hire.” Texas Ranger Captain Jack Dean’s receipt of a concluding comment is quite revealing and a bit unsettling: “Then [the FBI Deputy Assistant Director] said ‘Thank you, we don’t need your help anymore.’ Kid you not. . . .”