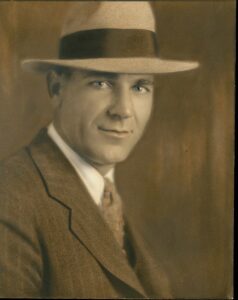 Occasionally people get confused and think we’re a museum about Texas Rangers baseball – not Texas Rangers law enforcement! Henry Warren “Rip” Collins (1896-1968) is unique in that he has been both a Texas baseball player and a Texas Ranger. Born in Weatherford, Texas, Collins became a star athlete playing football and baseball in high school. He went on to play football at Texas A&M University and began his baseball career in 1919 as a pitcher for the minor league in Dallas (later the Dallas Rangers).

Collins went on to play professionally across the country, including with the New York Yankees, Boston Red Sox, and Detroit Tigers. After a decade in baseball, he returned to Texas for one final season in the minor league before retiring in 1933. It’s at this same time that he was pursuing his career in law enforcement. In fact, he enlisted as a Special Ranger in 1931, listing his occupation as "Ball Player". He then enlisted as a Texas Ranger 1932-1933, and again from 1937-1940.

Collins’ Ranger service was just one aspect of his law enforcement career. He was elected Travis County Sheriff in 1940 and served for 8 years. He then became Bryan Chief of Police in 1950, and finally retired from law enforcement in 1959. He died in Bryan, Texas, at the age of 72. The Texas Ranger Museum has photographs, correspondence, and even weekly reports from his time as a Ranger. From professional athlete to elite law enforcement, Henry Warren Collins is a fascinating character in Texas Ranger history.