James Monroe Fox had a long career in Texas law enforcement. He had been working as a Constable in Travis County when he accepted a commission as a Texas Ranger Captain. Fox’s original 1911 commission appointed him Captain of Company “C”; in 1915 he became Captain of Company “B”. His company operated along the Texas-Mexico border during the volatile years of the Mexican Revolution (1910-1920). Fox would eventually resign his position following investigations into the 1918 Porvenir massacre.

In the period between 1910 and 1920, political turmoil in Mexico and crime along the border made the Big Bend region a focal point of border tension. Adjutant General James A. Harley stated in a report that “while the Rangers have prevented much lawlessness, there is much work still to be done.” With nearly all Ranger forces concentrated on the border, the Governor sent Captain James Monroe Fox and his Company “B” into the region to combat lawlessness. 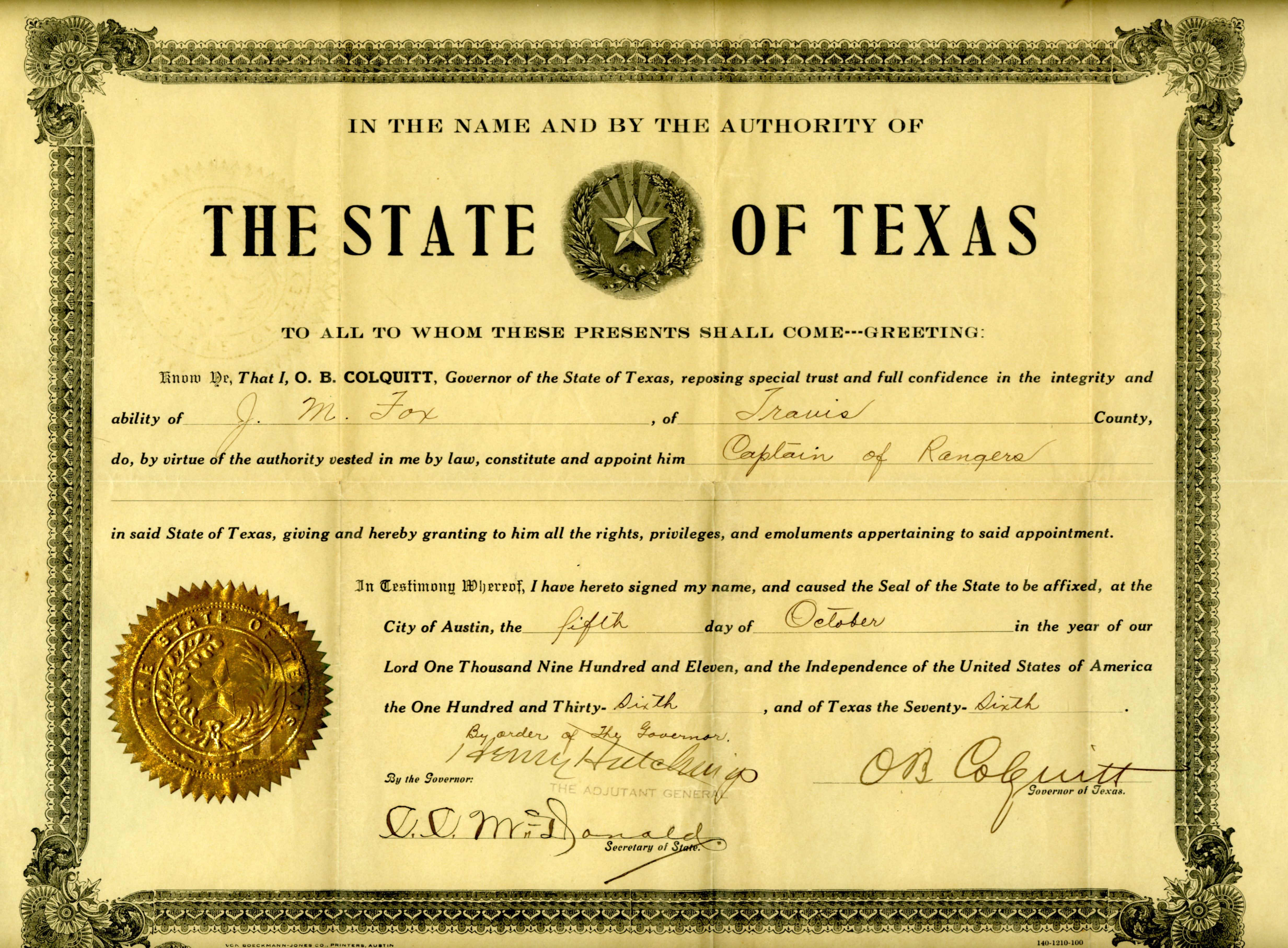 J. M. Fox's 1911 Commission as “Captain of Rangers”, and signed by the Governor.

Appealing to the Rangers for help, ranchers near the tiny border town of Porvenir persuaded Captain Fox that residents of the town were responsible for recent raids on their property. In January of 1918, Captain Fox dispatched eight Rangers to investigate the matter, while he stayed behind. The Rangers conducted their interrogations late at night, rousing residents from their beds for questioning. But the interrogations were inconclusive, and those who had been detained for questioning were released. Not satisfied, the Rangers planned another late night visit to search for weapons.

On the night of January 28, 1918, as the U.S. Army set a perimeter around the town, the Rangers and local ranchers turned the Porvenir residents out of their homes, and separated fifteen men from the rest. The next morning, the entire group of fifteen Mexican civilians were found dead at Porvenir. According to Ranger accounts, they came under fire while conducting their search, and began shooting back. According to local residents, the fifteen men were executed en masse. The victims included Antonio Castañeda, Longino Flores, Pedro Herrera, Vivian Herrera, Severiano Herrera, Manuel Moralez, Eutimio Gonzalez, Ambrosio Hernandez, Alberto Garcia, Tiburcio Jáques, Roman Nieves, Serapio Jimenez, Pedro Jimenez, Juan Jimenez, and Macedonio Huertas. Captain Fox did not document these events in his monthly report.

But a Porvenir resident named Harry Warren had recorded the names of the murdered men and their families and was demanding justice. Following state and federal investigations, Governor Hobby disbanded Company “B” and fired five of Fox’s Rangers. Adjutant General Harley attempted to transfer Fox to a desk job in Austin, which Fox refused. Instead, he tendered his resignation, believing that his men had only been performing their duties. Harley felt differently, that the problem “centered on the issue that fifteen men had met their deaths in Ranger custody, ‘after being arrested and disarmed’.” (Ritter 57)

Captain Fox's Smith & Wesson .44 Hand Ejector 1st Model revolver, which he carried with him during this period.

In January of 1919 Representative José T. Canales of Brownsville demanded a legislative investigation into the conduct of the Ranger forces and called for a reorganization of the force. The Texas Legislature investigated nineteen charges made against the Texas Ranger forces, including the Porvenir massacre. While the investigation did not accomplish all that Canales had intended, it did bring about reforms, including a reduction of the Ranger force to four companies, and higher wages to attract and retain good men.

Furthermore, “[Canales] brought to the public’s attention the dark side of the Ranger Force, characterized by abuse of authority, brutality, killings, drunkenness, racism, and political partisanship” (Harris & Sadler, The Texas Rangers and the Mexican Revolution, 458). The results of the investigation constituted a step towards professionalization which would culminate in the formation of the Department of Public Safety in 1935. Fox’s career with the Rangers was not over, but he never again saw Ranger duty along the border. He was reinstated by the Ferguson administration as Captain of Company “A” from 1925-1927, and held a Special Ranger commission from 1934-1935. He died February 11, 1937, in Travis County, Texas.

If you would like to read the proceedings from the Canales trial of 1919, they can be viewed through the Texas State Library and Archives here, listed under “The 1919 Ranger Investigation”.

Proceedings of the Joint Committee of the Senate and the House in the Investigation of the Texas State Ranger Force. (1919). Texas State Library.