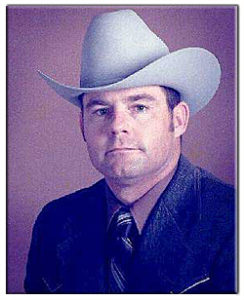 Stanley Keith Guffey was born in November of 1946 at Perryton, Texas. He joined the Texas Department of Public Safety as a patrolman in 1968 and served with distinction. In 1979 he was commissioned a Texas Ranger and his duty stations included Company D in Laredo, Texas and Company F, in Waco.

In January of 1987, Brent Albert Beeler, a parolee from Houston wanted for forgery, made his way to Horseshoe Bay, Texas. He kidnapped two-year-old Kara- Leigh Whitehead, daughter of local rancher Bill Whitehead and his wife Leigh, and their maid, 22-year-old Denise Johnson. Beeler barricaded himself in a house, killed Johnson, and demanded $30,000 and a car to release Kara-Leigh Whitehead. Determined not to let Beeler escape with the child, Texas Rangers Stanley Guffey and John Aycock volunteered to hide in the back of a Lincoln Town Car with the rear seat removed.

When the car was delivered, Beeler placed the girl in the front seat and threw a briefcase with the money in the back. In so doing he spotted Guffey, who identified himself as a Texas Ranger, and ordered Beeler to surrender. In the seconds it took Guffey to identify himself, Beeler fired a .44 Magnum revolver, fatally wounding Ranger Guffey. Guffey was able to fire one shot before collapsing, but it missed Beeler. Ranger Aycock returned fire through the car window, fatally wounding Beeler. He quickly pulled Kara-Leigh Whitehead to the rear of the car out of harms way before leaving the vehicle to approach Beeler.