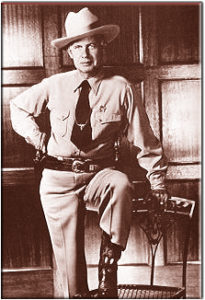 Manuel Trazazas Gonzaullas was born in 1891 in Cádiz, Spain to a Spanish father and Canadian mother who were naturalized U.S. citizens.

He served as a Mexican army major at age 20, worked five years for the U.S. Treasury Department, and joined the Texas Rangers in 1920. During the ’20s and ’30s, Gonzaullas enforced the law in the oil fields and on the border. Known as “El Lobo Solo” (the Lone Wolf), he pursued bootleggers, gamblers and drug runners alone.

In 1933, Governor Miriam Ferguson fired Gonzaullas and other Texas Rangers. In response, the Texas Legislature created the independent Department of Public Safety in 1935. Gonzaullas was appointed Superintendent of the D.P.S. Bureau of Intelligence and created a crime laboratory second only to that of the F.B.I. In 1940, Gonzaullas resigned from the Bureau and rejoined the Rangers as Captain of Company B in Dallas. After distinguished service, he retired in 1951, becoming a technical consultant for radio, motion pictures, and television shows such as Tales of the Texas Rangers. He helped found the Texas Ranger Hall of Fame and Museum in 1968.

Captain Gonzaullas died in Dallas in 1977 at age 85, leaving his scrapbooks and personal papers to the Texas Ranger Hall of Fame and Museum.