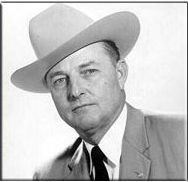 Clinton Thomas Peoples was born in Bridgeport, Texas on August 25, 1910.During the height of the oil boom in Conroe, Texas, Peoples served as a deputy sheriff and was promoted to chief deputy. Also, while in Conroe, Peoples was appointed a Special Texas Ranger by Governor Miriam “Ma” Ferguson to police the state’s four horse racing tracks.

In 1941, Peoples joined the Texas Department of Public Safety as a highway patrolman. IN 1946 he was appointed to the Texas Rangers and assigned to Headquarters Company in Austin. In 1953, Peoples was promoted to Captain of Company F.

During his years in the Rangers, Peoples worked a variety of cases including those involving Billie Sol Estes, the Maceo brothers gambling syndicate in Galveston, the La Grange Chicken Ranch, and George Parr, the “Duke of Duval.” In 1969, Peoples was made the Senior Ranger Captain for the Texas Rangers and transferred to Austin. He retired from the Rangers on March 31, 1974. Peoples was appointed U. S. Marshal for the Northern District of Texas by President Richard Nixon in 1974.

He held this position for 14 years. He served as an Executive Marshal during the bicentennial celebration for the U. S. Marshal’s service in 1989.

Clint Peoples was killed in an automobile accident on June 22, 1992.