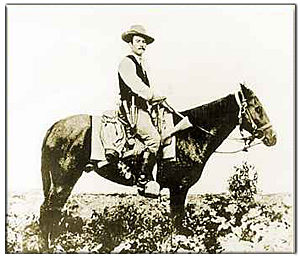 James B. Gillett was born in Austin, Texas on November 4, 1856. By 1872 the family had moved to Lampasas. Gillett soon started working at the local ranches. In 1875, he went to Menard and joined the Texas Rangers.

His first service was with Captain D. W. Roberts Company D. He later served with Captain N. O. Reynolds and G. W. Baylor. Gillett served mainly in the counties of Kimble, Mason, Menard, Kerr, San Saba, Llano, Lampasas, Burnet, and El Paso counties. In addition to fights with the Kiowa, Comanche and Apache Indians, Gillett also dealt with cattle thieves and outlaws. In January of 1881 Gillett, as part of a company led by G. W. Baylor, participated in what is called the last fight between Texas Rangers and Indians. After a pursuit of Apache Indians who had attacked a stagecoach, the Rangers surprised the Indian camp, killing six, including women and children, capturing a woman and two children and scattering the rest of the band into the mountains.

In December of 1881, after six years service, Gillett resigned from the Rangers. He was appointed assistant city marshal of El Paso. In June of 1882 he became Marshall of El Paso. Gillett had a reputation as a man without fear. He left the Marshall's office in April 1885, becoming the manager of the Estado Land and Cattle Company. He held this position for six years, resigning to begin ranching for himself.

Gillett ranched south of Alpine until 1904 when he moved his family to Roswell, New Mexico. The family moved back to Texas in 1907. He bought the Barrell Spring Ranch and began building a premium herd of registered Herefords. Gillett retired from ranching in 1923, leased his ranch and sold his cattle to his son Milton. Moving to Marfa he became very active in service clubs and helped to organize the West Texas Historical Association.

In 1921, Gillett wrote and published his memoirs, Six years with the Texas Rangers. It has remained in print ever since. The book was condensed into a textbook in 1928 and was used in public schools for many years in at least seventeen states. James B. Gillett died of heart failure on June 11, 1937. He was buried in the Marfa cemetery.