"Frank" Hamer, Texas Ranger Captain Frank Hamer (pronounced Hay-mer) was born on March 17, 1884 in Fairview, Wilson County, Texas. He grew up on the Welch Ranch in San Saba County. The family moved to Oxford, Texas in 1894. Hamer worked in his father's blacksmith shop and later as a wrangler on the ranch of Barry Ketchum. In 1905, while working as a cowboy on the Carr Ranch, Hamer helped to capture a horse thief. Impressed by his skills, the sheriff recommended Hamer to the Texas Rangers.

Hamer joined the Rangers in April 1906. He became part of Captain J. H. Rogers' Company C, patrolling the border in south Texas. In 1908 he resigned from the Rangers to become the City Marshal of Navasota, Texas. He served in this position until April 1911 when he became a special officer in Harris County. Hamer rejoined the Ranger in 1915. He was once again patrolling the south Texas border from the Big Bend to Brownsville. The Rangers dealt with arms smugglers, bootleggers, and bandits throughout the area. In 1921 Hamer transferred to Headquarters Company in Austin (now part of Company F) and served as Senior Ranger Captain.

In the 1920s Hamer was instrumental in helping to bring order to the oil boom towns such as Mexia and Borger. In 1928 he took on the Texas Bankers' Association "reward ring." The Association had placed a reward of $5000 “for dead bank robbers – not one cent for live ones.”  This had resulted in small-time criminals and innocent transients being framed and killed for bogus bank robberies to collect the reward.  Hamer’s public exposure of the practice was instrumental in bringing it to an end. Hamer retired from the Rangers in 1932, but retained a Special Ranger commission.

In 1934 the retired Capt. Hamer was hired as a Special Investigator for the Texas prison system to track down gangsters Bonnie Parker and Clyde Barrow. The notorious outlaws had killed more than a dozen law enforcement officers and unarmed citizens in a crime spree spanning several states. The Texas prison system became involved when the Barrow gang broke into a State prison, freed a gang member and killed an officer. After a three-month search, Hamer and Texas and Louisiana law enforcement officers ambushed and killed the criminals near Gibsland, Louisiana.

During the 1930s Hamer worked for various oil companies and shippers helping to prevent strikes and breaking up mobs. He was called again to Ranger duty in 1948 by Governor Coke Stevenson to help check election returns in Jim Wells and Duval County in the U.S. Senate race.

Frank Hamer retired in 1949 and lived in Austin until his death in 1955. He is buried in Austin's Memorial Park. 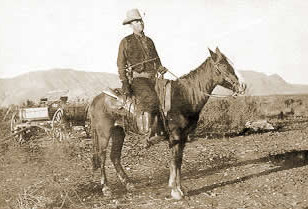